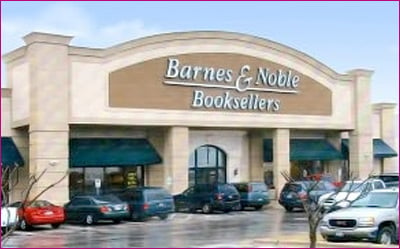 We live in a semi-podunk town--not quite backwoods, but definitely not urban. It's a smallish college community. How small? Let's put it this way: One of the hot spots to take my two- and one-year-old is to play with a Thomas the Train setup at a bookstore. And they look forward to it.

It doesn't hurt that I sniff books as a habit, so the field trip is just as gratifying to me. I'm pretty sure someone would alert the authorities if they saw me huffing and puffing away on those freshly minted pages, but I try to be discreet. Books are completely awesome. The Kindle is sacrilege.

I saved 9% on my $45 Barnes & Noble gift card by buying it online at Plastic Jungle for only $40.95. Awesome! It was immediately available in the amount I was looking for. But before I can even talk about savings, I have to understand and accept the company's gift card marketing strategy to make the Gift Card Challenge work.

Nearly 27% of all gift cards are never used.  And nearly 81% of all purchased cards carry a remaining balance until they expire or get lost. These are statistics from 2007, so I can imagine those numbers being even higher today with gift card popularity. To combat those problems, and stay on track within my budget, I have a few options:

Companies are banking that I'll view gift cards as monopoly money, expendable extras that don't really work into your budget and have a guilt-free right to collect dust until expiration. As a result, people--yours truly included--don't consider them like cash and lose or dismiss them. Businesses sell gift cards to make revenue on remaining balances, which has become a trickier proposition since the Credit Card Act imposed stricter guidelines for monthly fees and expiration dates. (More on this consumer-favorable change later.) Even with improved standards for gift cards, understand there are people out there who are banking on consumer laziness. And, for the most part, it works.

Ha! I exposed you! Barnes & Noble, your odorous volumes won't get the best of my bank account.

So here we are at the store, trying not to demolish Thomas and his buddies while I find a good read for my sweet babes. Seriously, did they have to put a giant wall of toys next to the train set? Temptations aside, I won't spend over my gift card amount (something the company is just begging for) and I won't leave a worthless balance.

The Relatives Came, The Carrot Seed, and a cheap version of The Little Mermaid. Totally two-year-old and thirty-one-year-old fun. And with a balance of $20.46, I'll have plenty to buy another goody later on in the month.

Update total with sharpie and we're off!