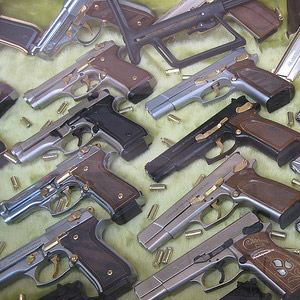 Organizers of a weekend handgun buy-back program in New Bedford, Mass., found $100 supermarket gift cards were just the ticket to lure about 140 weapons off city streets.

The Rev. David Lima, executive minister of the Inter-Church Council, which joined local law enforcement agencies to sponsor the exchange, said the community response was overwhelming. Although the total number of firearms collected isn't yet known, Lima projects it will triple the 41 firearms yielded at a similar gun exchange held last October.

Lima believed increasing the worth of the gift cards from $50 to $100 this year, combined with additional publicity, led to the success of Sunday's event.

Every person who turned in a functional handgun (revolver or pistol) at several city churches also received a large Domino's Pizza. The majority of firearms turned in during the no-questions-asked campaign were handguns known as "Saturday Night specials.

"Taking them off the streets is good news for every parent in the city," said New Bedford Mayor Scott W. Lang.

New Bedford is a former whaling port on the south coast of Massachusetts.