Gift Card Granny has been finding the best gift card deals since 2009. With many features and pages to choose from, we've guided shoppers to savings with over 300,000 discounted gift card deals, and published trends surrounding individuals re-selling their unwanted gift cards. The most common reasons for a recipient to exchange their gift card for cash include receiving an undesirable brand or simply rather having money that they can spend anywhere. It has become a very popular practice.

According to Google Trends, the amount of people who look to sell a gift card online has grown exponentially each year since 2010 with 163% more people looking to sell in 2016 compared to 2010. 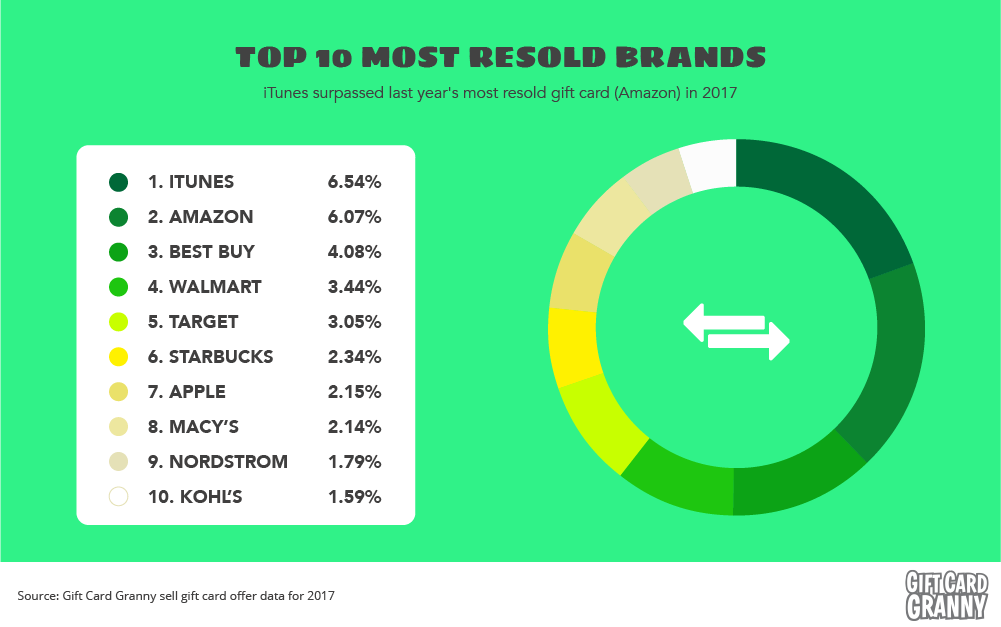 While iTunes is the most popular gift card in terms of re-selling, its return value is on the lower end of the payout spectrum at 65% or $65 when re-selling a $100 iTunes gift card for cash. Gift cards for the grocery giant Safeway yielded the highest return rate at 92%. 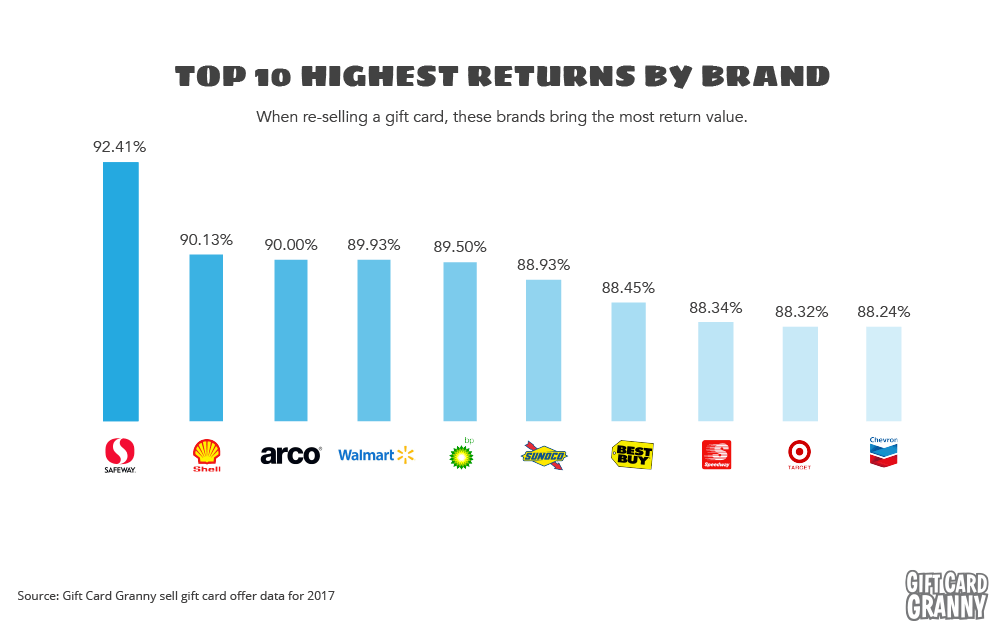 Supply and demand are the largest determining factors in how much an online exchange is willing to pay you for your card. The general rule of thumb is that exchanges will pay more for brands that they have less of and are in higher demand for consumer purchases as a result. Conversely, you will be offered less money for your gift card if it is a commonly re-sold brand and the exchange’s inventory levels are sufficient.

Everyday essential gift cards for gas and grocery retailers bring the highest rate of return at 89% on average. Retail gift cards for brands like Target, Best Buy, Apple, and Nordstrom will net a return of 87%. 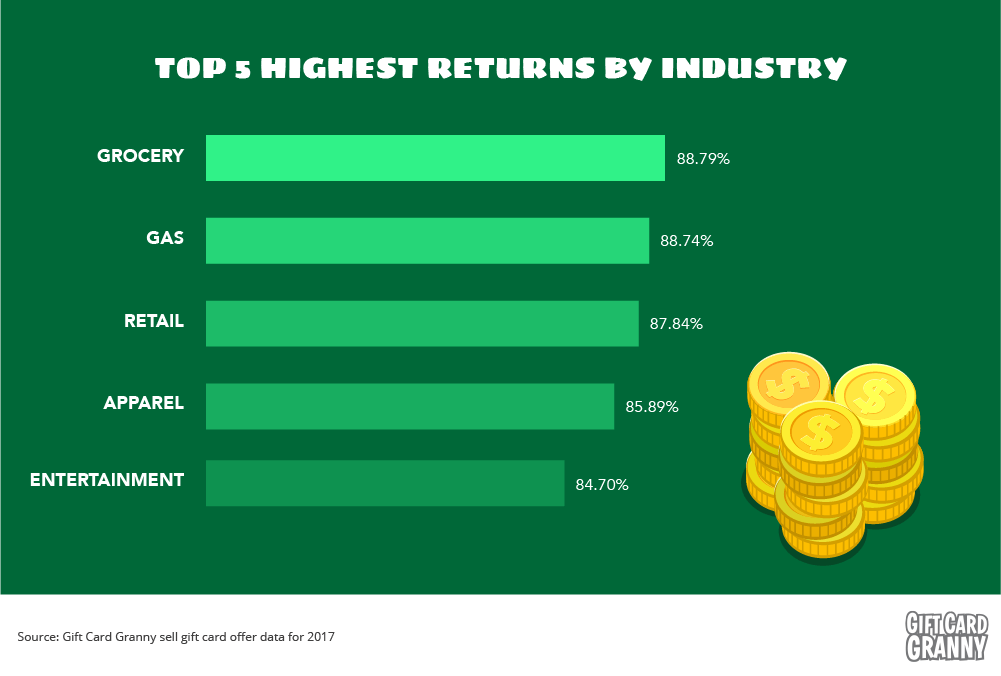 There was little variance in the most popular re-sell brands among age groups. Amazon, iTunes, Walmart, and Best Buy were the Top 4 re-sold brands across all age groups. Target was frequently resold more among younger people, while Nordstrom and Starbucks had a higher rate of re-sale for those 35 and above.

California, Texas, and New York accounted for a combined 34.3% of gift cards resold in the United States mainly due to their large populations. On a per capita basis, Rhode Island finished first with .114% gift cards re-sold per person. Close behind was California (.110%), Nevada (.106%), New Jersey (0.103%), and Massachusetts (.096%). 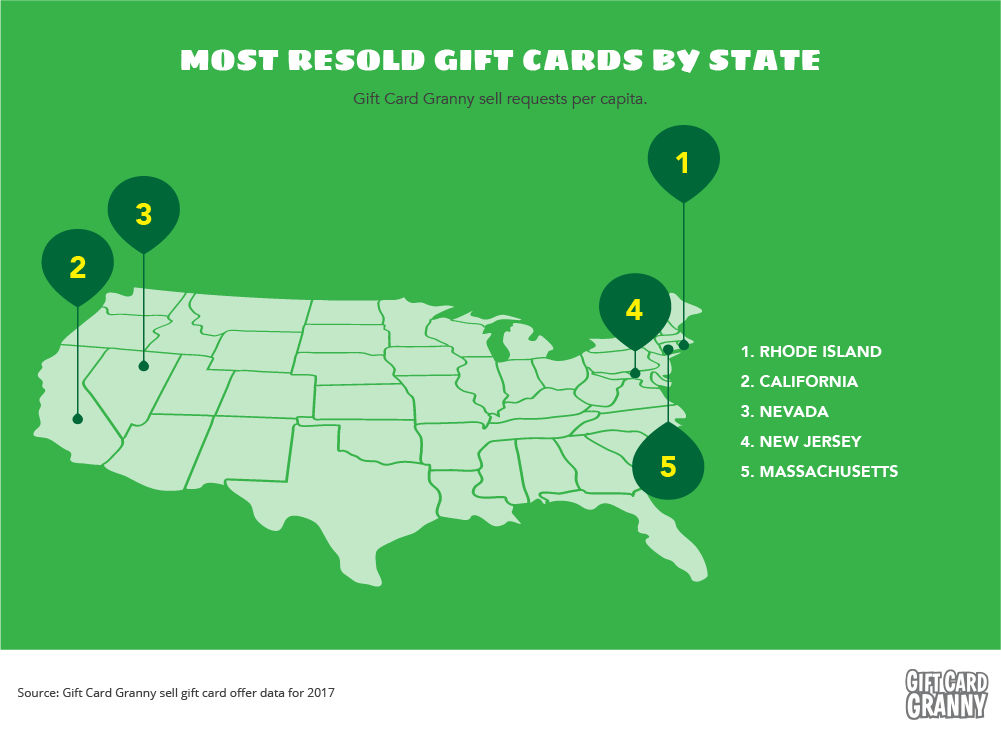 For more information on data surrounding the most re-sold gift cards and other gift card trends, email PR@giftcardgranny.com.  The raw PDF data for selling gift cards can be found here.

Full Infographic:  THE MOST RESOLD GIFT CARDS OF 2017 - Click to enlarge

The Most Romantic Restaurants in Dallas for Amazing Dates in 2022

23+ Last-Minute Gift Ideas Anyone Would Love This Year

Best Stocking Stuffers For Men: 23+ Gifts That They'll Want To Use

The Best Holiday Gifts For Women