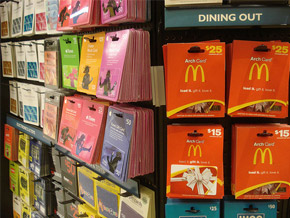 The Federal Reserve issued new gift card rules March 23 that, beginning Aug. 22, will help shelter American consumers from a flurry of unexpected fees and restrictions that have gradually turned into a financial snowstorm.

Gift cards have become so popular in recent years -- particularly with the advent of discount gift cards -- more than 95 percent of Americans have received and/or purchased them.

With increased usage have come increased complaints from consumers surprised by fees that devour the value of the cards and restrict how long they may be used. Public concern had grown to such an extent that the Fed received more than 230 letters weighing in on the proposal, originally unveiled in November. Many urged the banning of all fees and the elimination of expiration dates.

The Board's proposed rules generally cover retail gift cards, used to buy goods or services at a single merchant or affiliated group of merchants, as well as network-branded gift cards redeemable at any merchant that accepts the card brand.

According to the Associated Press, Sen. Charles Schumer, D-N.Y., who championed the gift card crackdown in Congress, wants faster implementation of the rules.

"Now that the new rules are finalized, we will work with the Fed to speed up the effective date rather than keep consumers at risk of being ripped off until next summer," Schumer said.

Here's what you need to know about the new rules.

1. Dormancy Fees
Gift card issuers can only charge what are known as dormancy, inactivity and service charges if the consumer hasn't used the gift card for one year or more. Some cards are levied a service charge just seven months after purchase, devaluing the worth of the card. Although this information is stated on the back of the card, recipients may not always know when the card was purchased and, thus, when this charge will be enacted.

2. Monthly Fees
Issuers, usually retailers, may not charge more than one fee per month. In other words, consumers won't be hit with an inactivity fee and service fee in the same month if they haven't used the card. Service fees are routine account-maintenance fees and "activity-based" fees, such as balance inquiry, ATM and reload fees.

3. Expiration
The new rules extend the expiration dates to at least five years after the date the gift card was issued, or, in the case of reloadable cards, five years from the date on which the card was last loaded with additional funds. This longer shelf life give consumers ample time to use the remaining card balance.

4. Clarity of Terms
Gift card purchasers and users must be provided with clear and conspicuous disclosures about all fees and expiration and dormancy dates.

5. Avoid Dormancy Fees
Consumers can avoid dormancy fees by following the terms detailed on the reverse side of a card. Pay close attention to dates and plan to use the gift card well in advance of the time any dormancy fees may begin.

Top 6 Gift Cards for 2-Year-Olds (and Their Parents)

15 of Our Favorite Unique Gift Card Ideas for Any Couple