Since the cave man showed loyalty to his fellow hunter by sharing an antelope drumstick, humankind has felt the need to give gifts. From the exchange of those early humble haunches, humans have evolved gift giving into a science, resulting in the time and money saver known as the gift card. Let’s examine the history of gift giving and gift cards to really catch a glimpse of the impact it’s had on our lives.

Many historians believe we owe our entire civilization to the gift-giving instinct: It's the groundwork of bartering and the basis of our modern economic system. Land passed from one generation to another was considered a gift, while the Romans and Greeks believed good luck to be a "gift" from the gods. Rulers, gods and religious leaders had long received "tributes" from their underlings, whether in thanks or fear of domination.

Even the thought of gift giving is a surprisingly complex and important part of human interaction, that helps to define relationships and strengthen bonds. In fact, psychologists say it's often the giver--rather than the recipient--who reaps the biggest psychological gain from presenting a gift.

Still, some people prefer a simplified version of gift giving, and cash gifts became a popular option as to avoid shopping. Merchants and restaurants, however, became concerned when they realized cash could be spent anywhere and not necessarily at their place of business, whereas a piece of paper representing a pre-established amount would bring the gift recipient back to their establishment. Behold, the invention of the gift card.

Before gift cards came into the market, the first paper cash equivalents (aka "gift certificates") were created by major department stores in the 1930s. Clerks were directed to hide the gift certificates behind store counters and sell them only to select customers upon request. In the 1970s, the ever-innovative McDonald's introduced its Christmas gift certificate program which created quite the buzz. Soon, other restaurants, merchants and malls followed suit.

A problem arose, however, in that the paper certificates took managerial time to issue and redeem. Tracking the sequentially numbered certificates was critical as the near-parallel invention of color copiers meant they could easily be forged and distributed. As a result, retailers were left to figure out a way to fight fraud but still provide an easy, convenient payment method. What developed became a game changer.

Smithsonian magazine sites Neiman Marcus as being the first retailer to sell gift cards in 1994. However, they are quick to note that the gift card movement didn't strike a chord with consumers as Neiman Marcus didn’t willingly advertise them. The merchant that put gift cards on the map is none other than Blockbuster Entertainment. Before streaming services like Netflix or Hulu, you had to go to a store to get your movie fix. Blockbuster was the first retailer to proudly and publicly display their plastic gift cards for all customers to see. The cards held no value until they were activated by store clerks upon payment. This handy-dandy new way to pay for your movie or video game rental made transactions faster, easier and more secure.

As other brands hopped aboard the gift card train, more improvements and expanded options were made. Starbucks' introduction of reloadable cards in 2001 created many a latte addict and built previously unseen loyalty.

Subsequently, by 2002, gift card sales grew to $37 billion and merchants soon began fighting to differentiate their products. Consumers now had the choice of store-offered artistic designs or customizable gift card options using photos, company logos or unique graphics. Furthermore, other clever marketing strategies emerged like when Home Depot made a card that was also a tape measure; or, when Target trotted out toys that doubled as gift cards.

It’s amazing to consider how fast the appeal for gift cards spread. Can you even remember a time when you didn’t use a gift card? As a result of their popularity and progress, we now turn our attention to where to buy gift cards.

Where to Buy Gift Cards 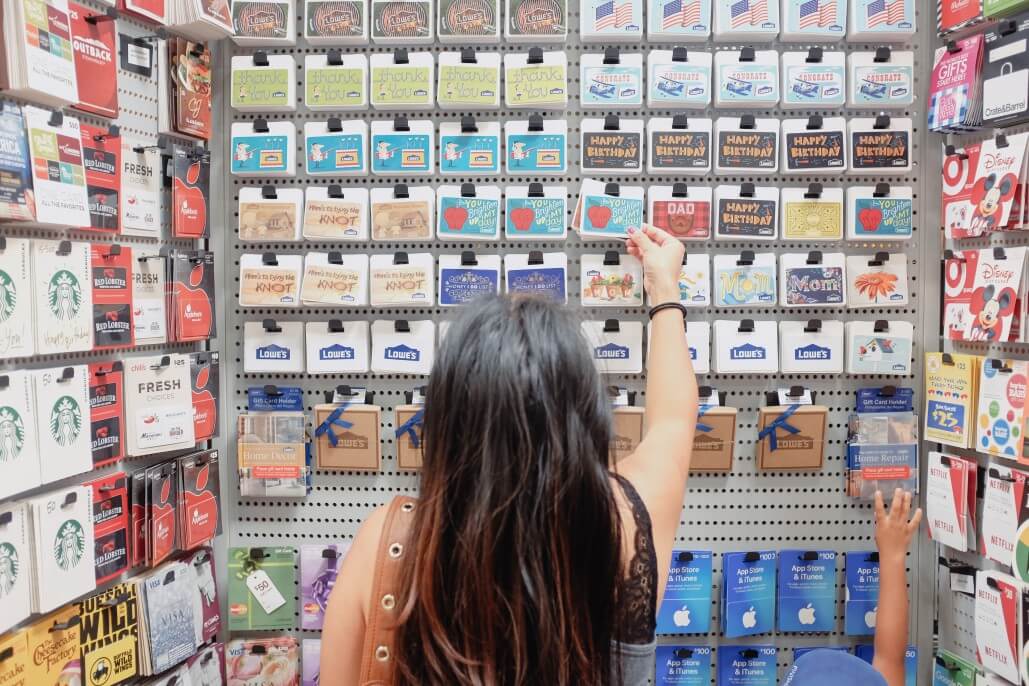 Racks of gift cards can be found everywhere from supermarkets to convenience stores. Rectangular plastic cards are giving way to gift card codes. Shoppers enjoy the convenience of digital gift cards a.k.a. egift cards direct from the merchant and trusted third party providers. These can be delivered in minutes via email, text, or app. As a consumer, it’s important to consider that when buying a gift card for a friend or for yourself, you have some options.

Plastic gift cards
Pros - Plastic cards are tried and true and are nice because you have something tangible to give or keep. There is helpful information printed on the back so if you ever have any questions, it’s available to you read at any time. Also, a number of retailers are able to add funds to an existing plastic gift card so you can keep on using it every time you shop.

Cons – On the flip side, having that little piece of plastic means keeping track of it. For example, you might have a junk drawer in your home or at the office that is a collection of random items. Dig around that drawer and you’ll probably a couple of gift cards in there. Also, it’s frustrating when you think you put your gift card in your wallet or bag but come to find it fell out. Unless you have the numbers stashed away in your memory bank, you’re out the value of the card.

Digital gift cards
Pros – Let’s face it, you’re more likely to forget your keys than you are your smartphone. Technology has made many things easier, and gift cards are no exception. With a couple of swipes and the click of a confirm button, you can buy and send an egift card in minutes. Quickly pay for a meal or make checkout a breeze when you have the cashier scan the bar code from your phone or have them enter in the gift card information at the point of sale.

Cons – While convenience goes a long way, giving or receiving an egift card may not feel as personable. Plus, you have to factor in a learning curve for accessing and redeeming. Will Grandpa Joe remember the steps to find and get the information? Finally, you have to pay attention to the fine print as some merchants will only accept egifts online and not in-store.

No matter what type of gift card you are interested in, one thing is for certain: gift cards are here to stay. According to a recent report by the National Retail Federation, gift cards account for a whopping 56% of holiday gift giving. This means you are bound to receive one or two in your stocking or in your inbox. Furthermore, the article goes on to note that gift card purchases are expected to hit $29.9 billion. That’s quite a chunk of change for something that has only been around for the past 25 years.

In short, whether you’re giving a plastic gift card or a digital card, you are sure to brighten someone’s day as well as your own. Giving is an act of care and joy and gift cards are a fantastic way to show someone you care. Introduce a friend to a favorite restaurant or encourage a loved one to treat themselves to some new clothes. Just be sure to visit Gift Card Granny for helpful tips, money-saving offers, and all the gift card knowledge you need.