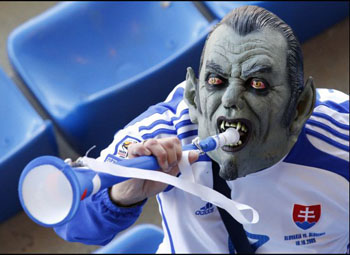 An astonishing estimated 1 in 10 people worldwide will tune in for the final World Cup game. With just one week remaining until bracket play begins, everyone from soccer fanatics to last-minute bandwagonners are eager to get outfitted and show some team pride.

Many of these gift cards sell for 15 to 30 percent off and range in price from $25 to $400. Remember, you don't have to give gift cards to someone else. Buy them for yourself and save on everything from soccer balls to team jerseys.

1. Nike Gift Cards
Oddly enough, Nike is not an official sponsor of the World Cup, yet Tiger Woods' sponsor still managed to garner more attention for its star-laden ad than Coca-Cola and Adidas. It proves the brand's influence on the sporting world is huge.

You might consider using a portion of your gift card to buy a set of Nike Mercurial Red Laces as part of the Lace Up to Save Lives campaign. The entire $3.99 will support soccer-based programs and help fight AIDS in Africa.

2. Dick's Sporting Goods Gift Cards
Dick's has an entire online section reserved for World Cup gear, where you can shop for shirts, balls, collectibles and more. Every team -- literally, every team -- has a specific store, many with up to 15 or 20 individual items. Most sit in the 15 percent discount range and are available for a few days to a few weeks.

3. Champs Sports Gift Cards
The sporting merchant has two current offers for World Cup related stuff. But even if Champs' selection of jerseys and team-specific apparel isn't enormous, they do offer soccer shoes and shin guards that will be useful long after boys from around the world stop bashing a white ball in South Africa.

Despite soccer insanity, some still won't get worked up about the sport. But it's summertime and the outdoors beckon. While the rest of the world is watching TV, wishing they could share in the glory, you'll be outside playing and enjoying every minute.

4. Bass Pro Shops Gift Cards
The outdoorsman specialists have the largest selection of cards at a flat, no-bid rate. Most were originally $100 and now dropped to $85, a good bet if you need a new backpack, jacket, set of bows or fishing pole.

5. Orvis Gift Cards
Orvis is a higher-end apparel and accessory merchant, similar to Bass Pro but with a golf sensibility. The U.S. Open this weekend went to a virtual unknown, meaning there's hope for everyone. A slew of cards from 12 to nearly 50 percent off could help you achieve that goal ... or prepare you for a personal trip to Pebble Beach.

Build a beautiful custom gift card for every occasion!

The Ultimate List of Summer Gifts Your Friends Will Actually Love

12 of the Best Graduation Gift Ideas

The 14 Best Gifts for Boys of All Ages